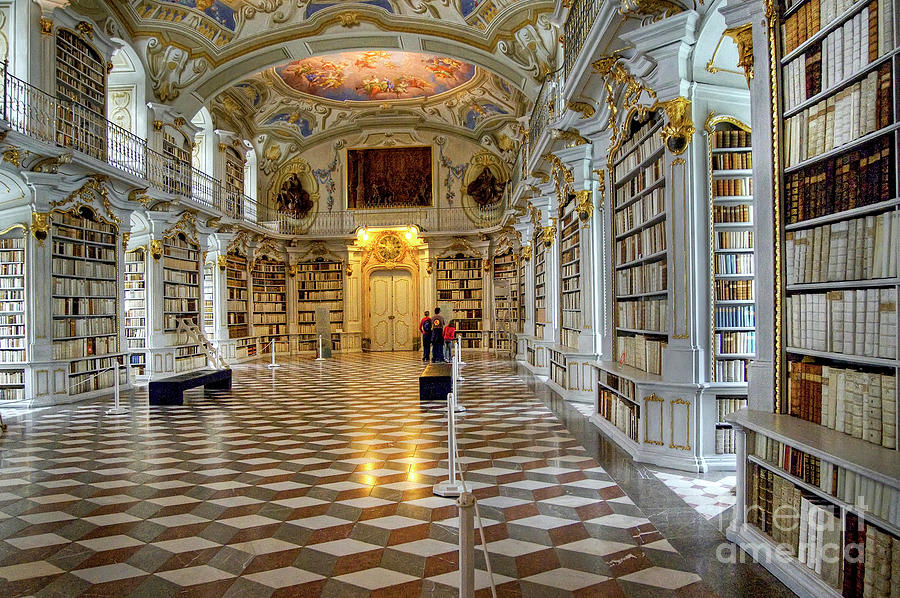 The library of Admont Abbey is one of the largest all-embracing creations of the late European Baroque. Within it are represented various artistic genres (architecture, frescoes, sculptures, manuscripts and printed works) that come together to form an impressive whole. It is a repository of the knowledge gleaned down the centuries.With its remarkable cupola frescoes, the late Baroque library hall commissioned by Abbot Matthäus Offner (term of office: 1751 – 1779) was finally completed in 1776. Originally designed in 1764, it was constructed in the following years by the Austrian master builder Josef Hueber (1715 – 1787). Hueber was an adherent of the ideals of the Enlightenment: “Like our understanding, spaces too should be filled with light.” The massive room with its three chambers is the largest monastery library hall in the world.The seven ceiling frescoes are also suffused with the spirit of the Enlightenment and were painted by the then 80-year-old Bartolomeo Altomonte (1694 – 1783) in the summer months of the years 1775 and 1776. They show the various phases of human understanding; beginning with thought and speech, through the sciences and arts, and finally culminating in Divine Revelation in the central cupola. In the cases below this cupola are stored various editions of the Bible and the works of the Church Fathers, in the side room to the north is theological literature while the books on other subjects are to be found in the southern side room.The Abbey’s sculptor Josef Stammel (1695 – 1765) created the numerous, elaborate limewood carvings in this magnificent space. Particularly striking are the ‘Four Last Things‘; a group consisting of the oversized figures of Death, Judgement, Heaven and Hell. However, these were carved before the library was built and were only subsequently incorporated, providing a stark contrast with the Enlightenment-imbued concept of the architect. Further information to the “Four last things” and to the “Universum” of Josef Stammel.
The library holds some 70,000 volumes while the Abbey in total owns nearly 200,000 books. The most valuable among these are the more than 1,400 manuscripts (the oldest dating to the 8th century AD) and the 530 incunabula (books printed before 1500).

What a beautiful library and well captured.

Glorious interior image Paolo. You have captured the sumptuous beauty of this library perfectly.

Beautiful image, congratulations on your feature

Paolo, this is the most amazing library I have ever seen, simply breathtaking. f/l

Congratulations, your beautiful artistic work is Featured on the home page of the "Bedroom Art Gallery" group. 3/13/22 l/f

Congratulations on the feature by the group Fine Art Exploration! L/F

So very beautiful! What a wonderful place! Congratulations! I’m am very pleased to feature your beautiful image in the group Covered Bridges and Historical Buildings. It’s a wonderful addition to the group! Please add it to the “2022 First Quarter Featured Images Collection” thread in the discussions area for a permanent record of the feature. Thank you!