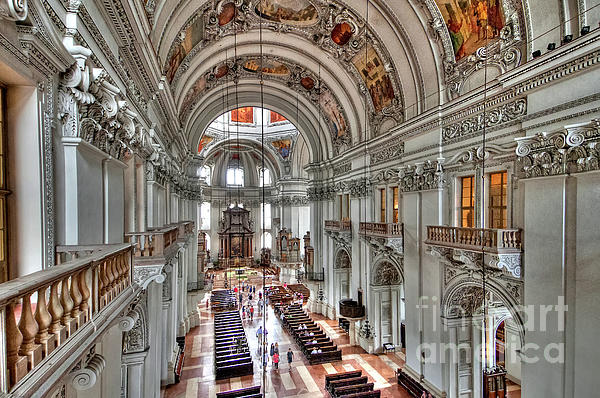 Salzburg Cathedral is the seventeenth-century... more

Congratulations, Paolo ! Your beautiful image " Salzburg Cathedral - Salzburg - Austria " has been featured in the " What a Wonderful World - Group " ! Thank YOU for sharing always your phantastic work ! Best wishes, Juergen

Beautiful photograph of the interior of the Salzburg Cathedral with great architecture and perspective! F/L

Congratulations ! Your Outstanding Art Work was FEATURED in the Group and rated “The Best of the Best” …. For more Exposure post your featured image(s) in the Group's Featured Image archive in the Discussion Tab !

Congratulations! Your beautiful HDR image has been featured on the homepage of the original "HDR photography" group here at Fine Art America.

Time to pat yourself on the back! Your stunning work is currently being promoted in the "Photography is Fun" group. Congratulations!!!

CONGRATULATIONS! .... and thank you for with us your wonderful work of art that been proudly presented on the Home Page of the group, 'ART FOR PASSION - PASSION FOR ART'. If you wish, you may archive it permanently or promote it further in the Discussions Tabs Featured .... Nancy Carol

Stunning image, Paolo! You have some gorgeous architectural photos!

Wonderful photo! Congratulations! I’m am very pleased to feature your beautiful image in the group Covered Bridges and Historical Buildings. It’s a wonderful addition to the group! Please add it to the “2022 Second Quarter Featured Images Collection” thread in the discussions area for a permanent record of the feature. Thank you!

Properties inscribed on the World Heritage List - Historic Centre of the City of Salzburg 1996Salzburg Cathedral is the seventeenth-century Baroque cathedral of the Roman Catholic Archdiocese of Salzburg in the city of Salzburg, Austria, dedicated to Saint Rupert and Saint Vergilius.Saint Rupert founded the church in 774 on the remnants of a Roman town, and the cathedral was rebuilt in 1181 after a fire.In the seventeenth century, the cathedral was completely rebuilt in the Baroque style under Prince-Bishop Wolf Dietrich von Raitenau to its present appearance.Salzburg Cathedral still contains the baptismal font in which composer Wolfgang Amadeus Mozart was baptized.