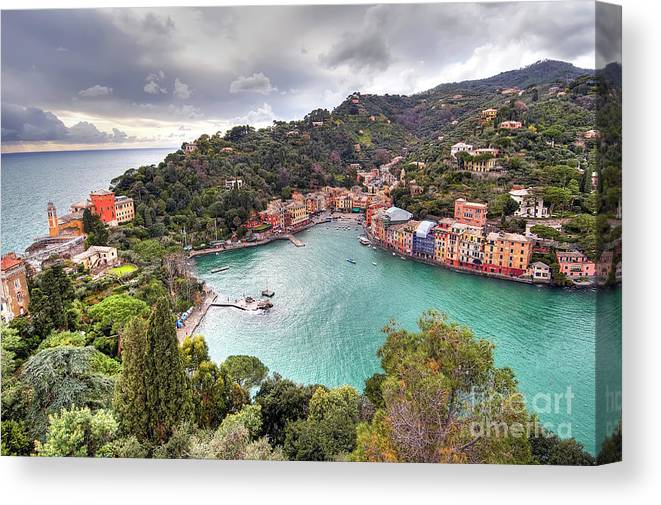 The watermark in the lower right corner of the image will not appear on the final print.

Portofino - The Bay - Italy canvas print by Paolo Signorini.   Bring your artwork to life with the texture and depth of a stretched canvas print. Your image gets printed onto one of our premium canvases and then stretched on a wooden frame of 1.5" x 1.5" stretcher bars (gallery wrap) or 5/8" x 5/8" stretcher bars (museum wrap). Your canvas print will be delivered to you "ready to hang" with pre-attached hanging wire, mounting hooks, and nails.

According to Pliny the Elder, Portofino was founded by the Romans and named Portus Delphini, or Port of the Dolphin, because of the large number of... more

Lovely point of view, congrats on your feature in Travel Art

Congratulations! Your beautiful artwork has been featured on the main gallery of the "Travel Art" group at Fine Art America! For further promotion, I invite you to post it to our FB group (link provided on our homepage) F.

Paolo, this is a lovely image! Italy is on my bucket list, and your wonderful photographs have inspired me!

Beautiful landscape on the sea. Quite enjoying your images of Italy, Paolo.

CONGRATULATIONS! It is my great pleasure to FEATURE your artwork on the homepage of the group No Place Like Home, 12/17/2021. You are invited to post it in the Group's Features Discussion thread for posterity or any other thread that fits! l/f

A stunning capture of an incredibly beautiful place, wow!! Too gorgeous, and yes would love to jump into this image right now!!

this is exactly where I would like to be now Paolo, so beautiful

Congratulations! .... Your wonderful work of art has been presented on the HomePage in the group, 'ART FOR PASSION - PASSION FOR ART'. Thanks for sharing with all of us. If you wish, you can archive it permanently or promote it further in the Discussions Tabs .... Nancy

Beautiful image, Paolo!!! Congratulations, your work is Featured in "Your Best Work"! I invite you to place it in the group's "Featured Image Archive" Discussion!!

According to Pliny the Elder, Portofino was founded by the Romans and named Portus Delphini, or Port of the Dolphin, because of the large number of dolphins that inhabited the Tigullian Gulf.The village is mentioned in a diploma from 986 by Adelaide of Italy, which assigned it to the nearby Abbey of San Fruttoso di Capodimonte. In 1171, together with the neighbouring Santa Margherita Ligure, it was included in Rapallo's commune jurisdiction. After 1229 it was part of the Republic of Genoa. The town's natural harbour supported a fleet of fishing boats, but was somewhat too cramped to provide more than a temporary safe haven for the growing merchant marine of the Republic of Genoa.In 1409 Portofino was sold to the Republic of Florence by Charles VI of France, but when the latter was ousted from Genoa the Florentine gave it back. In the 15th century it was a fief of families such as the Fieschi, Spinola, Adorno and Doria.In 1815 it became part of the Kingdom of Sardinia and, from 1861, of...