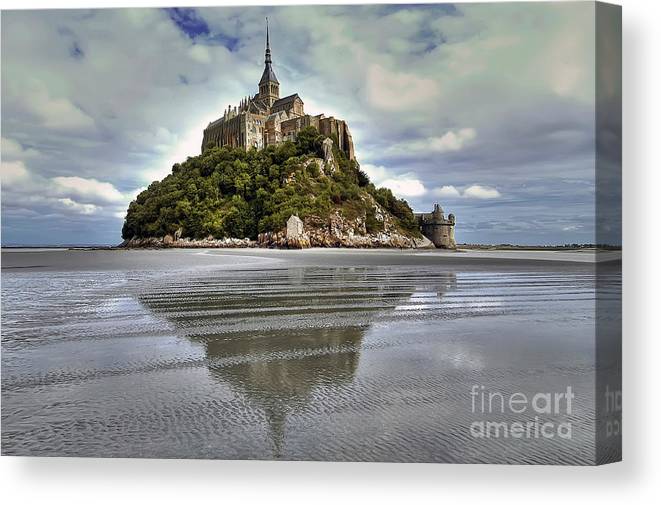 The watermark in the lower right corner of the image will not appear on the final print.

Mont Saint Michel Viewed by the Bay - France canvas print by Paolo Signorini.   Bring your artwork to life with the texture and depth of a stretched canvas print. Your image gets printed onto one of our premium canvases and then stretched on a wooden frame of 1.5" x 1.5" stretcher bars (gallery wrap) or 5/8" x 5/8" stretcher bars (museum wrap). Your canvas print will be delivered to you "ready to hang" with pre-attached hanging wire, mounting hooks, and nails.

Loving this capture of the famous Mont Saint Michel. Stunning!! Love the lighting and reflection.

I love this place. From reading French and Belge "bandes dessinnees". And now, you have immortalized a so beautiful photograph of it. Wow!!!.

F/L. How lovely! This is a place of fairy tales and wild imaginations.

Wonderful image, longing to see this inferno some day!

Such a beautiful shot, Paolo! I've always wanted to visit there.

Congratulations your image has been chosen as a feature on "UNIQUE PHOTOGRAPHY" To ensure that your image remains available over time, you can archive your art in the discussion.

Congrats! This photo has been featured on the •UNESCO World Heritage Sites• group on FAA/Pixels. ||| Featured images are capped around 30, so you are invited to archive your photo to the "2021 Features!" discussion topic.

Paolo, great shot of this amazing location with a wonderful description. f/l

Love this POV of the Mt. St. Michel! l/f

Congratulations, your wonderful image has been featured on the Homepage of the Photography Only Group, please feel free to add it as a permanent record to the Discussion thread for featured images.

Thanks ever so much for the feature Much appreciated, I am truly honored

Properties inscribed on the World Heritage List – France Mont-Saint-Michel and its Bay 1979Mont Saint-Michel was previously connected to the mainland via a thin natural land bridge, which before modernization was covered at high tide and revealed at low tide. This connection has been compromised by several developments. Over the centuries, the coastal flats have been polderised to create pasture. Thus the distance between the shore and the south coast of Mont-Saint-Michel has decreased. The Couesnon River has been canalised, reducing the flow of water and thereby encouraging a silting-up of the bay. In 1879, the land bridge was fortified into a true causeway. This prevented the tide from scouring the silt around the mount.On 16 June 2006, the French prime minister and regional authorities announced a €164 million project (Projet Mont-Saint-Michel)to build a hydraulic dam using the waters of the river Couesnon and of tides to help remove the accumulated silt deposited by the rising...